Designing Starlight on Water started with a Design Seeds photo and palette on July 12.

I immediately thought that the white boat was a striking part of the photo, and I knew that it should play a role in the quilt design.  I also thought that the ripples in the water added a subtle texture to the photograph.  My first block was a very simplified EQ7 applique drawing of those inspirations: 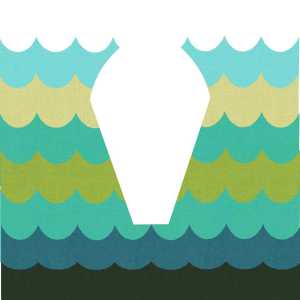 I couldn’t stop there, because the drawing didn’t express the calm I felt from the photo.  I started playing with the block in EQ7’s Block>Serendipity>Kaleidoscope.

The above screenshot shows EQ7’s  ‘Create Kaleidoscope from Block’ dialogue box.  I have 3 different boat blocks on the left, because I tweaked the original block a bit before I was ready to play with Kaleidoscope.  On the right are 4 different triangle subsections of the selected block. The selected subsection, marked by a turquoise box and multiplied by 8, makes up the center block.  By selecting different subsections, I can get 8 different blocks.

When I find a block I like I click the ‘Add to Sketchbook’ button in the dialogue box.  Sometimes the kaleidoscope is really beautiful, sometimes I like the shapes, and sometimes I choose not to add it to my Sketchbook.  Here are the blocks I chose for Starlight on Water:

I further edited the colors in the blocks once I started putting them into the quilt.  Creating the center star used another Serendipity function which I will show you tomorrow.  The blocks will be constructed using fusible raw edge applique. Have a quilty day!

Today I would like to show you some more quilts which I designed with the help of EQ7’s Block>Serendipity>Shrink and Flip.  You can find part 1 of the tutorial here.   In the galleries found below the first image is always the original block and the following blocks are the combinations from Shrink and Flip,  used in the quilt design and numbered to reflect the set of flags in the Shrink and Flip dialog box.

I took the “Palm” block in EQ7 and rearranged it for the following quilt design.

For the following quilt, I recolored some of the patches in each block once it was set into the quilt and I also darkened the background.

Finally here is the Orange Slice design which I showed you in part 1 of the tutorial:

Spend some time to play around with this neat feature!

I am trying to do at least one Quilt Design a Day on Facebook.  Each day two palettes are chosen based on two photographs and then we are challenged to design at least one quilt, not spending more the 15-20 minutes on a design.  Today’s photo was taken from Design Seeds, it is a picture of the side of a building:  turquoise shutters with orange and blue siding.  Some days I jump for joy, because the palettes are so beautiful, or the inspiration photo is so beautiful; other days I just say to my self, “huh?? how am I going to use that color scheme?”  I saw today’s colors from the above photo and wondered if maybe I should go wash the dishes!  🙂

I looked at the photo, noticed the slats in the shutters and the lines of the colored siding.  I  tried several blocks which had similar lines, none of which seemed right to me.  I went in search of inspiration and searched for photos of American Southwest art.  I frequently look at art or photos to inspire me.  Most of the time I will pick up a shape, an idea, or a play on words, etc. which will jump start my brain.  Today, I saw a photo of a rug and thought I could adapt that to a block design  and this design was born: 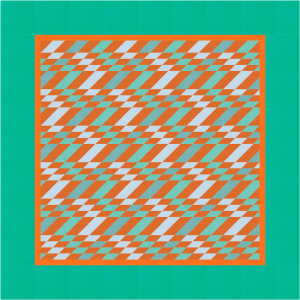 I was so relieved that I had come up with something, I quickly posted it…and then regretted.  I liked the horizontal lines, the feeling of movement, but I wasn’t completely happy.   I walked away and enjoyed a really stupid movie with my sick son.  (No, his illness was not caused by looking at this quilt!)  I definitely achieved a feeling of movement (maybe too much) in the quilt, when I really wanted to create more minimal design.  I needed to edit.  My next thought was to add some negative space, although I’m not sure that orange is that negative space and I rotated  half of the blocks 90 degrees.

I think my “editing” further complicated my “minimal” design.  I looked some more at the original photo.  I thought that the shutters and the orange siding were important in the original photo, so the quilt should reference them.   As a result I drew the slats of the shutters, I placed them off-center to the left of the block and chose the darker blue as the background, and then placed the orange.   A minimal design.  It is so simple, why does it seem so difficult??  Which design do you like best? 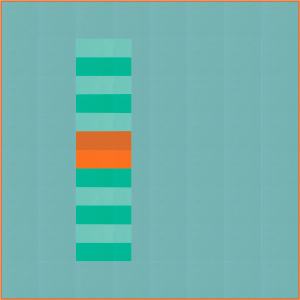 How do you get inspiration?

Have a quilty day,

We had some absolutely stunning palettes to work from over the weekend at Quilt Design a Day.  I had gobs of fun designing.  The colors reminded me of summers sitting by the pool, but in the shade with sunscreen and a hat, drinking cold drinks–heaven!!  I’ve been thinking about making this one.  It would be fun to do with Dale Fleming’s 6-minute circle method, which you can find here:  http://www.hgtv.com/video/easy-circle-quilt-blocks-video/index.html).

I’d also like to sew the Ocean Waves quilt in the patriotic colors.  What a great idea for a July 4 picnic.  It would be tons of fun to quilt in the negative space–fireworks, exploding feathers, etc. 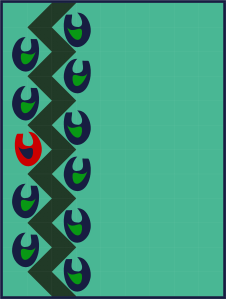 Have you ever felt like the “odd bird” out?  I know that I sure have, just like the red bird above.  However, that is the bird that makes the quilt interesting I think.  Celebrate your unique-ness today!!

Did you notice that most of my designs were inspired by things that happen in the summer??!!  “Orange Cream sickle”,  I loved them as a kid (if truth were to be known, I think I still like them 🙂 ).  Enjoy the spring!!

Linking up with:  Anything Goes Monday.

Have a quilty day!!

I am an AQS Certified Quilt Appraiser, Longarm Quilter, Quilt Historian and Teacher in the Holmen and greater La Crosse, Wisconsin area.